For nearly two years I had been saving and prepping the Caponord. It was time to put some serious miles on the blue Aprilia and do some touring in earnest.

There were a few objectives of the trip, some were achieved, some not, but that didn’t matter; the main thing was to ride the Caponord to its fullest.

One objective was to look at sites for the upcoming Australian Caponord Meeting. This meant traveling to the high country.

Day minus 2 to minus 1
Last minute packing, prepping and re-organising. I did check lists, more check lists and still forgot some bits and bobs. (Note to self, ALWAYS take a belt for your trousers).

Day 1: Left Sydney around 8.00am and headed towards Canberra taking some back roads rather than the easy F1 freeway. On the way I noticed a bit of clutch slip. I had changed levers recently and knew that it was most likely just some adjustment on the new lever required. The problem was I didn’t have an Allen key small enough. Anyway, it could wait until Canberra.

I arrived in Canberra at around 3.00pm (Hey, I was meandering a bit!), set up the tent at the local caravan site and then met up for dinner with a friend. I adjusted the lever hoping all was going to be ok. 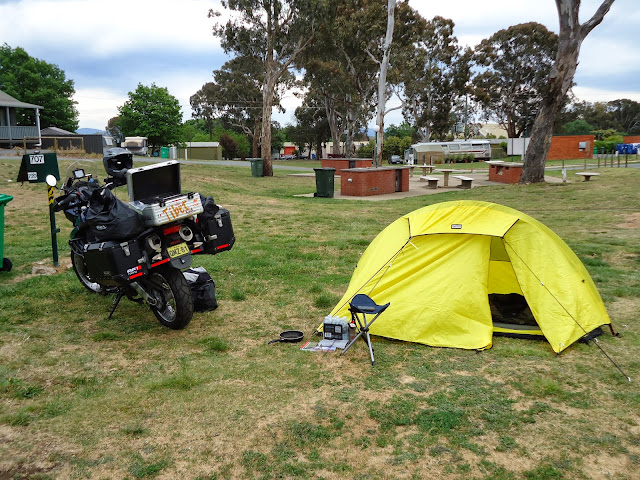 Day 2: Headed towards Tumbarumba via Tumut. On the way to Tumut, I saw a lot of bikes on the road and in Tumut. (I estimated around 200+) I found out later it a cancer fundraising trip in a nearby town. I bought myself a pie and a drink in Tumut and watched the parade of various bikes for at least an hour.

Next stop Tumbarumba. The first thing I noticed was the drop in temperature while riding. The ambient temp was around 10-11deg. The longer the ride, the colder it got until I had to stop and put a few more layers on.

That night the forecast was for sub-zero so I decided to chicken out tenting and took a cabin at the local caravan park. Even though the cabin was pretty dirty, at least it was warmer than the -2 night outside. There’s not a lot to do in Tumbarumba on a Saturday night, so I walked the deserted streets and saw very little but a sleepy little town.

Day 3: Headed off to Melbourne via Holbrook, Albury, Tallangatta and then to Cottles Bridge to visit a mate from the Aprilia club. (Steve, aka Precis, another Caponord rider) The trip started by some of the most lush pastoral land I had seen in ages and the road was an endless run of pleasantly long sweepers. (Perfect hey!)

I arrived near Steve’s place around 4.00pm. Cottles Bridge is nestled in the back hills of Melbourne and is really away from it all.

I have to say, I’ve done plenty of dirt riding over the years, but Steve’s driveway was a challenge with a fully laden bike. With hairpin turns, steep gradients and then more hairpin turns, I had to use every skill I could muster up to keep the bike upright. Somehow I got the front door!!

I had a lovely afternoon and night with Steve & Liz and enjoyed a good time around a bonfire with Steve. 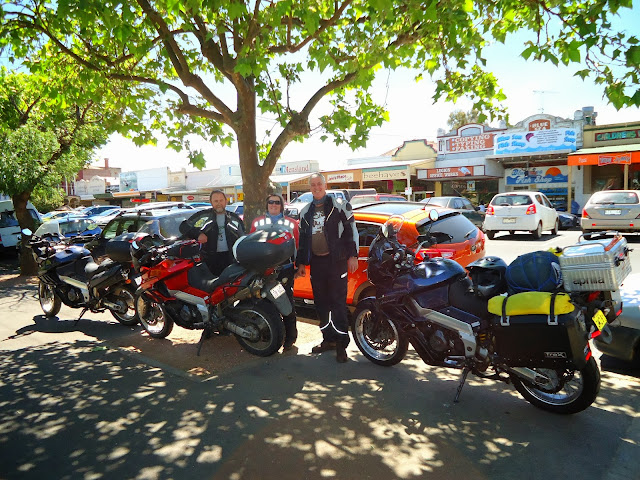 Day 4: Steve’s wife, who also rides a Caponord was looking at purchasing a new motorbike, so we decided to all ride to together so she could look at the potential bike. This is quite a thing to have 3 Caponords all together in Australia. It was a beautiful day for a ride with perfect temps and great roads. Throw in some spirited riding from Steve and it was a day of riding to remember. After a good lunch we parted company and I headed off to Hall’s Gap, which is at the base of the Grampian Mountains. 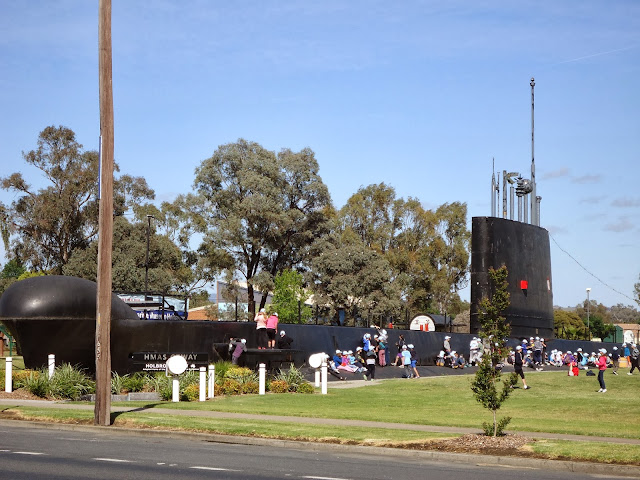 Fig 3. You see some strange things in the middle of nowhere. A submarine at least 500kms away from the closest sea. In fact it's the decommissioned HMAS Otway at here final rest place.

Day 5: Hall’s Gap is a magnificent place to camp. I woke up to Koalas above my tent and a plethora of bird life. I should have stayed longer, but the call of the road was too loud. I travelled through the Grampian Mountains via a place called the Zumpsteins. This location is simply a camp site that is renowned for Kangaroos but it must have been their day off, because I didn’t see one. Oh well! 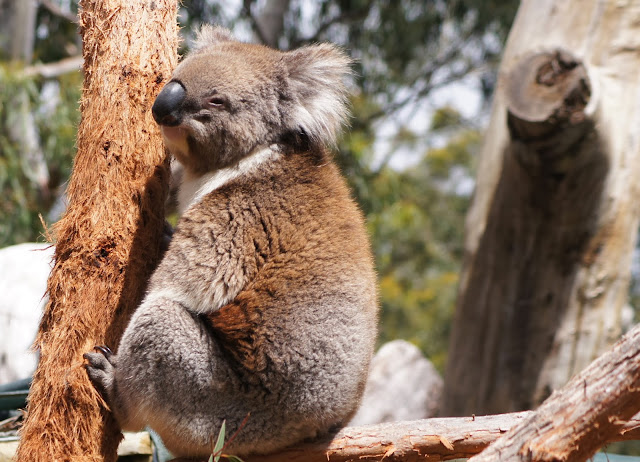 Next stop was Horsham. This is a big rural city, so I wandered around and had a bit of a look. After an hour or two it was time I headed for Lake Alexandrina.
On the way, I saw a pink lake. Essentially it was a salt lake that was evaporating lever and amazing salt crust. I wish now I had taken a photo, but for some stupid reason I didn’t stop.

Driving this road is a fairly long haul and on some of the straightest roads in Australia, but I wanted to get to the lake. So much for that plan as the road into the Lake was closed due to flooding and road work, so I changed route and headed towards Tailem Bend. I couldn’t find a decent place to camp along the road so chose a caravan park. A huge mistake!! The place was extremely noisy and run-down. I can laugh about it now but at the time I wasn’t funny. Not much sleep that night.

Day 6: Off to Adelaide! I went all the back roads and relived some of my youth with some of the best biking roads in South Australia. I had cut my teeth on these roads and enjoyed every km. Unfortunately, I must have picked the wrong day to drive behind a truck. A rock was flicked up and smashed my helmet visor and damaged my helmet. I can consider myself fairly lucky that I wasn’t hurt. The helmet was a right-off and meant I had to buy a new one in Adelaide. I arrived in Adelaide around 3.00pm.

Day 9: After having lunch with another Caponord rider, Alby (aka Caponord) I headed towards the Barossa Valley. Unfortunately I arrived a bit late and most of the wineries were closing and as such I couldn’t buy any wine. Next stop was Barmera.

I got to Barmera at around 5.00pm to find the town was crowded beyond belief. A local sporting event meant that every camp site was booked solid. Next stop Renmark. Again, no joy and I’m starting to get concerned. I didn’t mind sleeping rough but the only real place to camp was along the Murray River.

Considering it was mating season for the local Tiger snakes, I thought better of it. Way too dangerous in a tent. At 7.00pm I arrived in a small village called Paringa and booked into a pub. At first it looked a bit ordinary, but after a fabulous meal and talking with some local characters it turned out to be a really top place.

Day 10: Headed off to Mildura and it was decision making time. I could turn left and go to Broken Hill and see some big desert country or turn right and head across the Hay plain. I chose right. (I was very glad to made this decision later.)

The Hay plain is what we call a micro desert in Australia, however it’s roughly the size of Tasmania. It’s a vast and amazing place with harshness that is breath-taking. If you can imagine driving 2 hours without seeing a tree, then you can get an idea of how vast it is. The temp was hovering around 35degC and the wind was blowing at around 30 knots. It made the riding difficult, but not too unpleasant. The wildlife however was extraordinary.

I saw Emus, Eagles, a few Kangaroos and a myriad of bird life. I had a quick lunch stop in Hay and then pressed onto West Wyalong.

Again, the other side of Hay is even more desolate. I drove for 3 hours not seeing another vehicle of any sort, a tree, or sign of water. Simply stunning!!

I arrived in West Wyalong late in the night quite tired and worn out.

Day 11: Headed off to Bathurst and the weather was turning nasty. I could see on the horizon storms building. At around 10.00am the rain started and the temp dropped to around 10 degrees. Again the wind was an issue and gusting up to 40 knots. The driving was starting to get a bit difficult.
I arrived in Bathurst to sunshine! Unbelievable! I looked at the map and thought about making a dash for Sydney. At only 200kms away it seemed like I could give it a shot. However, the rain came in again and it was getting too dangerous to drive. I stopped for the night in Lithgow, (famous the world over for its recent bush-fires.)

Day 12: The rain seemed to have slowed, so I decided to cross the Blue mountains. This was a decision I would later regret. Thunderstorms came in and the driving was very slow and dangerous. I could hardly see and got completely soaked.
At around arrived home at around 1.00pm very wet and very tired.

So, overall the trip was enjoyable. The Caponord did very well and performed as it should. The rain on the last day did take its toll and now I have a dead bike. The battery seems ok, but could need a charge or maybe I have some bad earths. The stepper motor failed at Steve’s place but got me home. The clutch got worse, but I’m sure it’s easily fixed. My new RR sum-guard was slightly damaged but easily repairable. Some electric gadgets stopped working, but I’m sure these are also an easy fix.

Posted by CapoAndrew at 5:48 PM