In an earlier post I mentioned the purchase of some Chinese panniers. Although they do the job, there are some issues with them that I have never warmed to. The lids weren’t hinged. (One is now) The latches were garbage (now replaced), the sheet metal is not good quality. There seems to be a theme doesn’t there!
So, what is the alternative? Average specialist pannier sets cost anywhere from $600AUD to $1900AUD. These are insane prices for what is essentially a box for storage. There are a million and one panniers out on the market and they all claim to be the ultimate storage box.  I decided to set a personal  criteria and go from there.
I already have a Genuine Aprilia top-case, which is actually a branded Hepco and Becker (or in reality rebadged Rimowa manufactured cases) setup. Nice kit, but the side cases are stupid money and aren’t the strongest out there. I do however enjoy the ease of fitment and removal, with a twist of a key and a flick of a latch. The proposed side cases must be as easy to use. 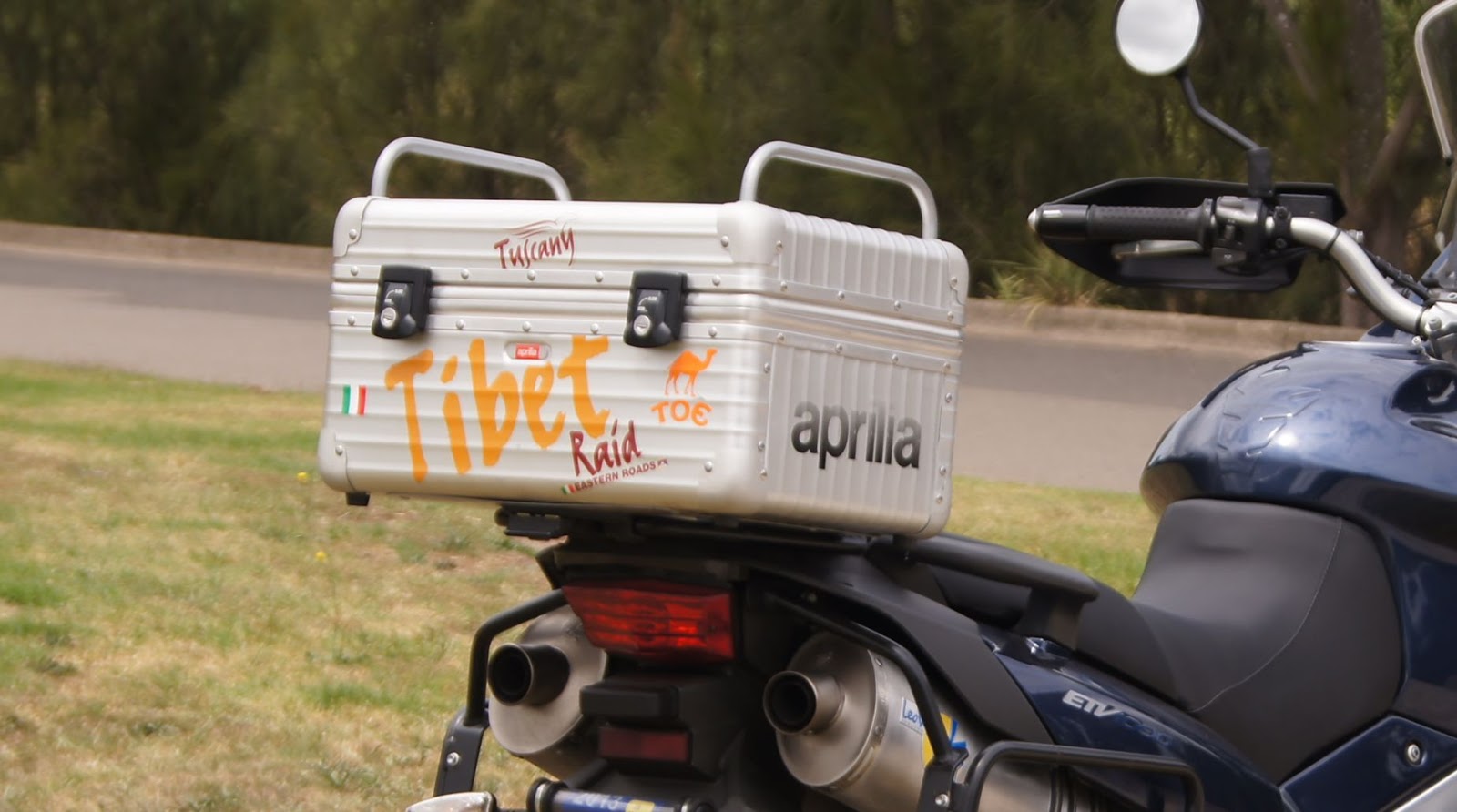 Also, the Chinese cases were rated at 37 litre and were just a little too narrow for getting gear in and out of. I wanted something wider, but just a little.

The lids should be hinged, and since I already have Hepco and Becker racks, the new panniers must be able to utilise these.

The Adventure Rider world is a great place to be involved in. Via a friend of a friend of a friend, (with a few more thrown in) a pair of very slightly used SW Motech TRAX panniers came on the market. They looked interesting and the price was right.

The following Youtube  video sealed the deal. http://www.youtube.com/watch?v=kLRcBLatA44
I’m now waiting for these babies to arrive.

I’ll put up a full review when they are fitted.
Posted by CapoAndrew at 9:11 PM 1 comment:


Well this is the other Easter story we aren’t so familiar with. This is not a story from long ago but a journey that would be in the true spirit of Adventure.
The Caponord was itching to get dirty again. My partner Karine and I decided it was time to break free from the city and do some touring and camping.
After a quick consultation with Google maps we decided to head for the Beecroft Weapons Range near Currarong in NSW. This area is used by the Military to test weapons, but part of the “safe area” is among some of the most beautiful parts of southern New South Wales.

Friday night we spent prepping up the bike and the normal camping kit. Tents, bed and food were thrown into the panniers and top-box. Karine developed a sore back which could have put the trip into jeopardy, however the next morning she was ok.

Over the previous week I had spent some time doing a re-map of the Aprilia ECU. Thanks goes out to Mike Chaplin from California for his work in this regard. Mike did all the hard work on a Dyno developing a state of tune that would transform the Caponord from average to Wow! After installing the maps and asking a few questions on the AF1 forum about Fuel trims, IFT, LTFT, etcetera, I found the “sweet spot”.  (Thanks guys on the AF1 Forum)
Saturday morning we hit the road! The weather was perfect and the traffic out of Sydney was light. Past Wollongong and the traffic thickened so we took a break for a while. 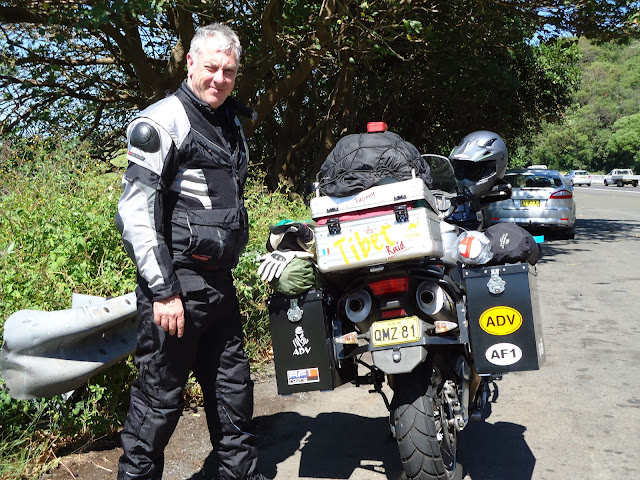 Saturday lunch was in Berry. The only reason Berry exists is for tourists. The lunch at the pub was not wonderful but it was better than the $15 hamburgers the tourist sheep were grazing on next door.
Back on the road we headed through Nowra and then turned east. The road to Currarong passes through beautiful emerald green dairy farming areas. The ever present odours (Cow poo) of the country reminded us where we were.
We arrived at the Weapons Range and booked ourselves in.
The road to the camp site is 9kms of dirt. I should have dropped the pressures on the tyres a bit, but even so the bike handled brilliantly. Once we arrived at the camp site, we set up the tent and then went for some exploration.
The beaches around Jervis Bay are some of the quietest and most pristine in NSW. It really did feel at times like we were the only ones there. At one stage we came across a Kangaroo that must have been very used to people because it followed us around for a while looking for a hand out. We also saw a magnificent Sea Eagle searching for its nest and Kookaburras having a laugh. 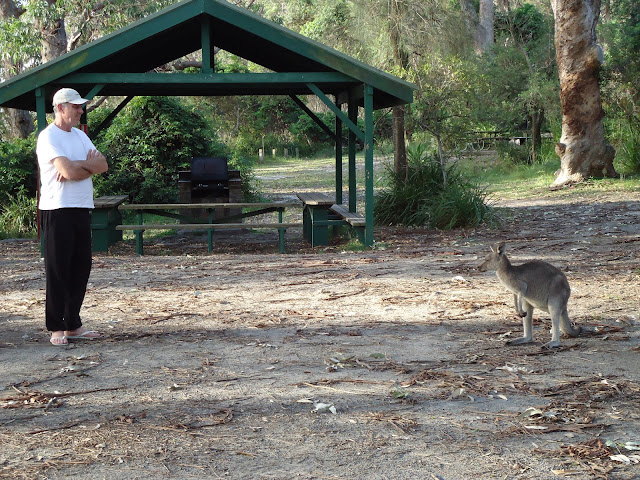 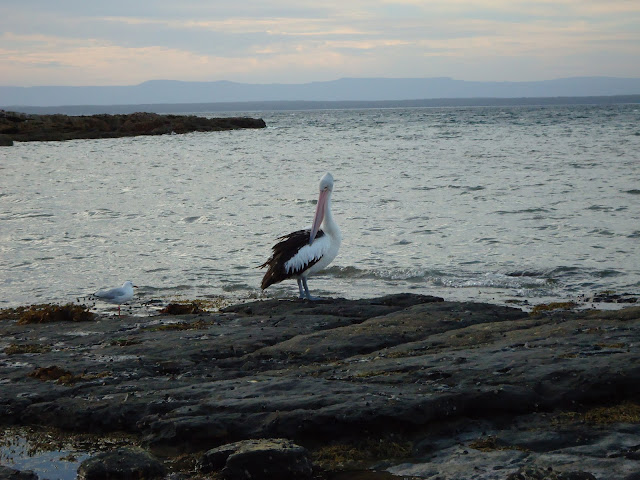 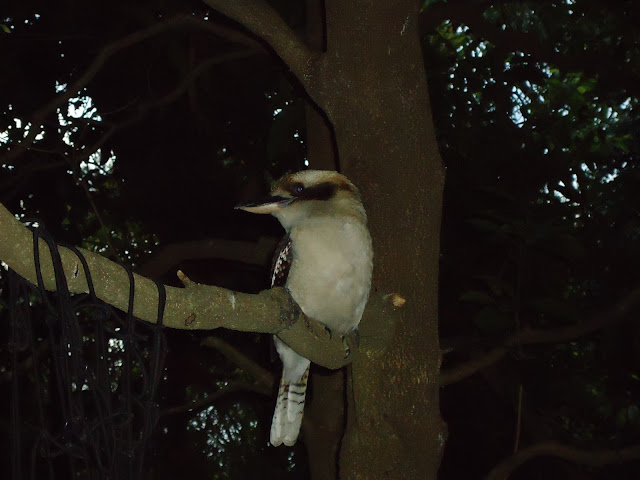 Enough of the friendly!! 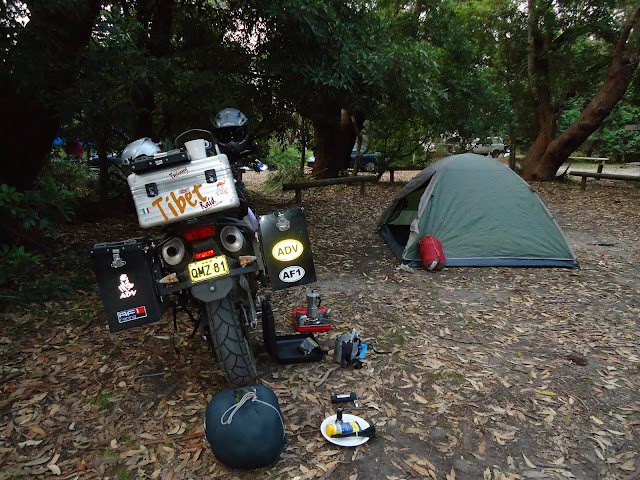 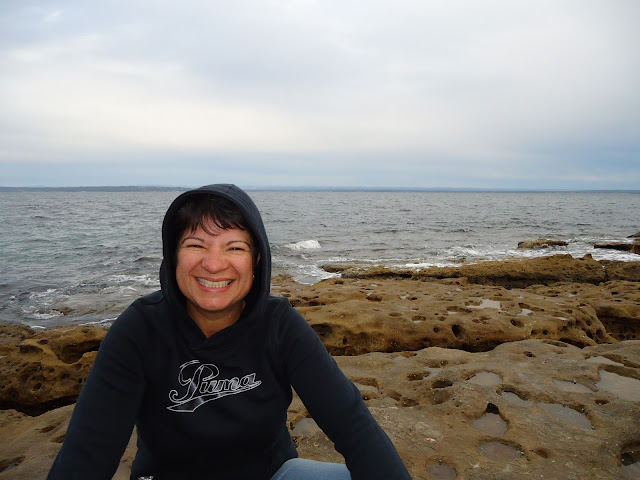 The navigator, pillion and Love of my life.

Later that night we found Honeymoon Bay. I tried to take photos to capture its beauty, but every one failed. This tiny inlet that was tranquillity in a handful. 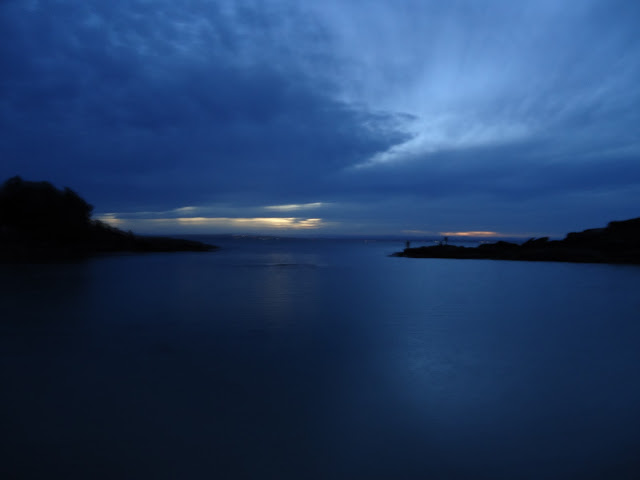 And by day it was even better.

The next day we meandered back to Culburra, Nowra, Kiama and then to Helensburgh. Later that afternoon we arrived home, tired but satisified. 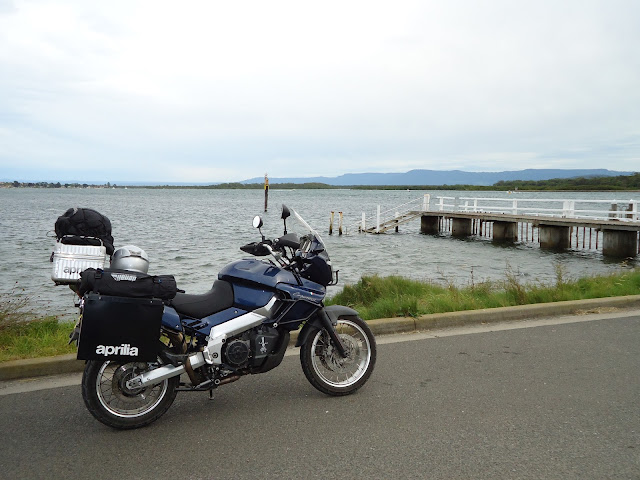 Culburra was a tad cool.

The mapping had transformed the Caponord. The Aprilia has always been a joy to ride, but the new fuelling has made the experience even better. If I sat on 4000rpm the motor seemed to be at its best. Overtaking is effortless.
The only negative to the trip was my pannier rack cracked at a weld. Anyway, this gives me an opportunity to remove the racking, weld up the joint, add a gusset to the joint to get some strength and powder coat the whole unit. (It’s currently painted). It’s a job that I should have done ages ago.
So that was our Easter. Relaxing, fun and enjoyable. Again the Caponord shone and proved to be one of the best bikes I have ever owned.