I was dreaming of the next day’s adventures when I heard a vehicle close by. For a moment, I was nervous. It was 11.30pm and I was alone, in the middle of the bush and without any radio or phone communications.

I popped my head out to of the tent to see a trio of guys getting out of a 4x4. What on earth??

My nerves were soon calmed when I saw the fishing rods. Damn, late night poachers!!

The only thing I could do was relax and keep an eye out. As it turned out, they couldn’t care less about me. All they wanted was a load of fish and a few rums.

By 1.30am they left and I returned to my dreaming!

I had forgotten all about the change from daylight saving and woke up at dawn. 5.00am
I gulped down a couple of cups of hard black coffee and wandered down to the lakes edge.

I was standing on the shore of heaven. The lake was like glass, the air was clear and the air crisp. And the best part was it was all mine. 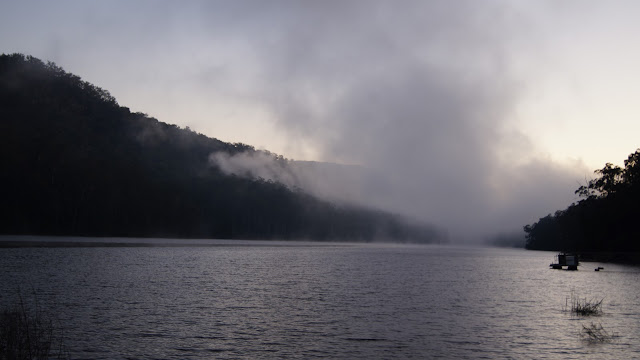 As I stood on the shore I could see low fog rolling into the valley. It was almost like smoke drifting in. A wind came up out of nowhere and the lake changed from serene to chaos. It then hit me that this could turn into rain, which meant I could end up being damp for the day and that was something I didn’t want.

I packed up the bike and left my private piece of tranquillity. 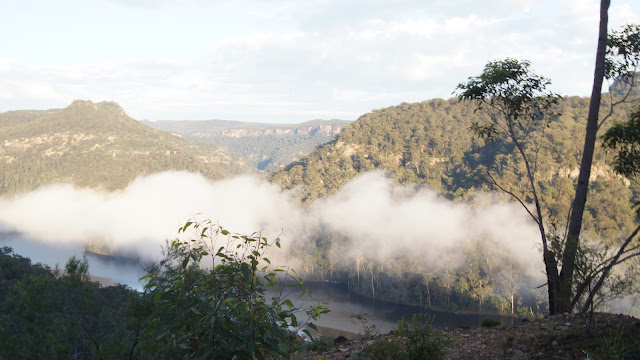 Before leaving, I checked the Sat Nav and discovered that there was an undiscovered trail leading to the main road. It looked good and wasn’t too long, so it was worth the risk.

The new trail was actually a lot easier than expected, however a heavy fog made the riding slow. The layer of fog was from ground level to about 500 feet in altitude, so at times as I rose above the 500 feet I would pop out into a ghostly expanse of cloud. I almost felt like an angel dancing over the clouds. 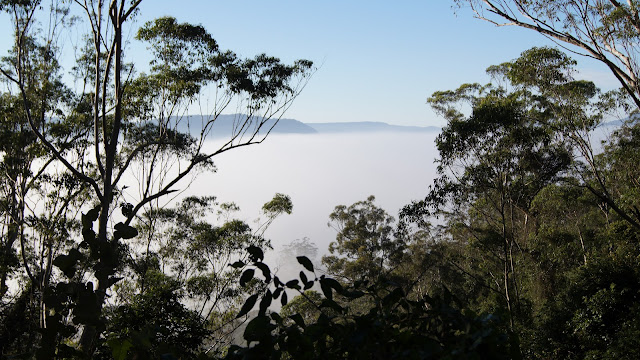 Once I reached the main road I switched the Sat Nav to home mode and progressed to Bowral. (The birth place of one of our most famous cricketers, Don Bradman.) Bowral was still asleep when I rode in at 7.00am, however I felt satisfied that I had already enjoyed the best part of the day.

The rest of the trip home was quiet and uneventful with the exception of a police car chasing a speeding driver. This gave me a good chuckle as I rode past and saw the face of the driver. Lunatic!!

It was good to be home, even if my trip was a short one.

The Caponord performed flawlessly with the exception of the tyres failing to cope with some of the trails. Since then, I have purchased some new Michelin Anakee 2 tyres, which I hope will make a difference.

I have come to appreciate the Caponord more and more, whilst respecting its limitations. The Capo is not a trail bike, it wasn’t designed to be one. It is however a true Adventure bike which allows a rider to go places that the average driver will never see.

I encourage all Caponord riders to have a go. Start with an easy trail and then progress to something more challenging. You won’t regret it for a second!
Posted by CapoAndrew at 8:14 PM