What did I want from my new motorcycle? Well it had to be a Dual Sport for a start. The occasional off-road blast, good in traffic (Something the KTM950A never was) and most importantly reliable.

I started looking around and considered the following:


So I started hitting the pavement to try before buying. There were some good deals around with the Japanese bikes. I rode a few and everytime felt just that bit let down. Most were boring and had cheap finishes.
The BMW was out of the question, I just couldn't find one for a reasonable price.
The Ducati was nice, but would need serious modification for it to be useful off road.

Then one day I saw an ad for an Aprilia Caponord. Hmm, this is different. My partner and I went the other side of town and took a blue 2002 Caponord for a test ride. First impressions were not brilliant, but mainly because I was so used the KTM. It had power, but everything seemed in the wrong place. It was comfortable enough, but a bit top heavy. In addition, we nearly got wiped out by an unattentive driver on the test ride.

My partner and I went home scratching our heads. Then, the more I thought about the Capo, the more it intrigued me. I checked out the AF1 forum (Aprilia Nutcases, but all great guys) and asked a few basic questions. Was it any good? Was it reliable, known faults etc etc.

As it turned out, the issues were typically Italian, but not major. Electrical issues were easily repairable, if at times frustrating. The Rotax motor however was known to be a gem.

With that knowledge, I purchased the Caponord and took her home. The Missus loved it, the Neighbours hated it, and I was beginning to appreciate an Italian bike again. 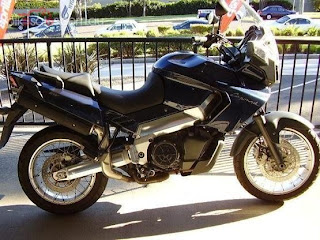 Posted by CapoAndrew at 6:41 PM